On Saturday night I went down to the Copper Box Arena for the BoxNation / BT Sport show. I'd been looking forward to this card, stacked from top to bottom with some fantastic 50/50 fights.

The atmosphere was electric with a packed house, I just can't understand why a small minority of the crowd tried to spoil it towards the end of the night but we will get to that later.

I was desperate to get there early to see my old stable mate Larry Ekundayo fight Gary Corcoran who I've also worked with, a fight that was always going to be a barnburner and it didn't disappoint!

Larry was looking for the space to box but with Gary's relentless pressure he showed that he is more than capable up close and personal.

It was a gruelling hard fought affair, Larry had him hurt badly in the ninth and at the start of the tenth but couldn't quite get him out of there.

Eventually it went to the score cards after an epic battle. Gary Corcoran just nicked it on a split decision but it really could have gone either way. I'm gutted for Larry Ekundayo but after that fight both men's stock has risen and he'll come again better than ever.

The other stand out fights for me were English Super Middleweight champion Darryll Williams vs Jahmaine Smyle, a rematch of a potential fight of the year candidate, and a heated affair between Asinia Byfield and Sam McNess. McNess had the amateur pedigree but lacked experience in the pro-game and unfortunately it showed!

He took a very hard loss, with the towel being thrown in and I hope he can come back stronger and not let this defeat affect him too much. Respect has to go to Byfield for doing exactly what he said he would.

The Darryll Williams vs Jahmaine Smyle fight saw a similar fight to the first one but with Smyle trying to box and move on the outside a little more, but from early on I felt Williams pressure would overcome him and he was visibly tiring. Williams retained the title he won from Smyle the first time around.

The main event saw Bradley Skeete do exactly what he had to do to win the Lonsdale belt outright, boxing and moving superbly, not giving Evens a change to land and wining a landslide points decision.

Anthony Yarde won the European title in a first round blow out and really looks like he's going to go on to become a huge star of the sport.

All in all I had a fantastic time at the show, loved the atmosphere, great 50/50 fights and caught up with old friends from the boxing world.

As I said at the start, it was a shame a very small minority of the crowd caused a bit of trouble after McNess lost. This really isn't needed in boxing but was dealt with quickly and efficiently.

Liam Williams, Barry Jones, Hughie Fury and Joey Pyle , it was great to see you all there amongst others. 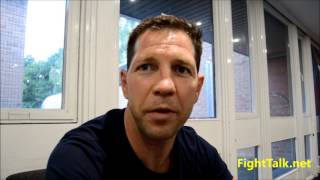